Residents of Nyamekrom, a suburb of New Juaben South in the Eastern Region, on Sunday mobilized to construct a wooden footbridge to enable students, teachers and nurses, in particular, to cross the Kwakwanua river which overflowed its banks, collapsed and washed away a bridge cutting off the entire community.

Nyamekrom a suburb of the Eastern Regional Capital with a population of over 5000 was cut off on Friday, October 22, 2021, after a heavy downpour that caused the river to flood the road and about 30 homes, violently washed away a bridge and portion of the 10.1 kilometres Koforidua -Nyamekrom to Supriso road.

Residents who had travelled before the disaster could not return while those in their homes could not leave to town. Nurses, teachers, students and workers were equally stranded.

On Sunday, October 24, 2021, the youth in the community mobilized to construct a wooded footbridge downstream of the river to temporarily aid crossing from Monday.

“Since the incident happened, everybody in this Community is stranded. Nobody goes nobody comes. This is the only road that links Nyamekrom and other Communities to Koforidua. In fact, the disaster has affected us very well. So we are constructing this footbridge to enable us to cross in the meantime. But we are appealing to the government to come to our aid,” one of the community members, Johnson Yeboah Gyekye told Starr News. 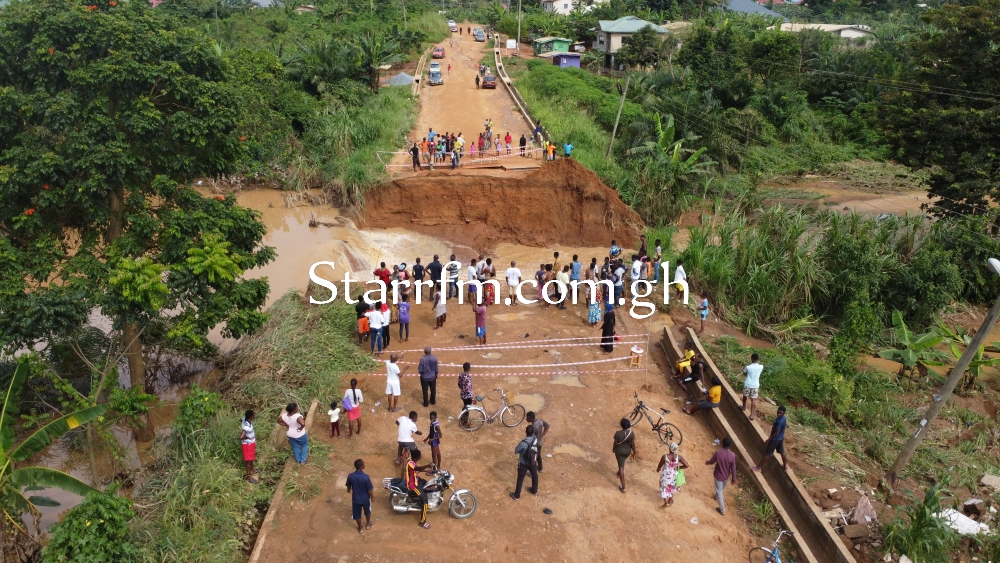 The Assembly Member for Nyamekrom Enock Boahene told Starr News, the situation needs an emergency response by the Central government to reconstruct the bridge immediately to restore normalcy to the community.

“Government should treat our situation as an emergency because we have been cut off. No car is able to come here and no resident is also able to cross on foot. We are here to construct a footbridge to help teachers, students, nurses and traders to cross by foot from Monday”.

According to the Assemblymember, the disaster is creating serious sanitation challenges which would worsen in the coming days due to the inability of waste collection vehicles to cross to the community to empty waste generated by residents.

The Assemblymember stated that the flood submerged about 30 homes and displaced dozens. He said a poultry farm was equally flooded, drowned and carried away the birds.

The 10.1-kilometre Koforidua -Nyamekrom to Supriso road was awarded to contract and sod-cutting ceremony performed by the Vice President Dr Mahamadu Bawumia on October 27, 2020, but construction work is progressing at a snail pace.