Gabby Asare Otchere-Darko, a leading member of the NPP, jumped on the 80th anniversary of Emmett Till, a young black child murdered in a hate crime, to call attention to the consequences of hate.

He shared a picture of the murdered black teen with a caption that reads, “Emmett Till was only 14 when he was kidnapped and brutally murdered 66 years ago. His crime was being black. His killers were a group of white people brought up to HATE black people. He would have been 80 today. Just remember, hate can kill. Enjoy your Sunday.”

According to Gabby, LGBT+ activities are already illegal in the country. And the passing of such a Bill is likely to get Ghana blacklisted for promoting hate. He also explained the hypocrisy that lurks behind such a contentious Bill.

“The irony is that we are using a colonial legacy, based on UK’s Offences Against the Person Act 1861, which proscribed something called “unnatural carnal knowledge” as the roots of our moral fibre to enact a law which we say it is to protect us from a foreign threat to our norms!”

Emmett Louis Till was a 14-year-old African American lynched in Mississippi in 1955 after being accused of violating the unwritten code of behaviour for a black male interacting with a white female.

According to reports, Emmett was visiting relatives in the area when he flirted with a white woman, 21-year-old Carolyn Bryant. Days later, he was kidnapped, tortured, shot in the head and finally thrown into a river by the woman’s husband and brother.

Three days after his disappearance, his body was found in the river weighed down with barbed wire tied to a large metal fan. 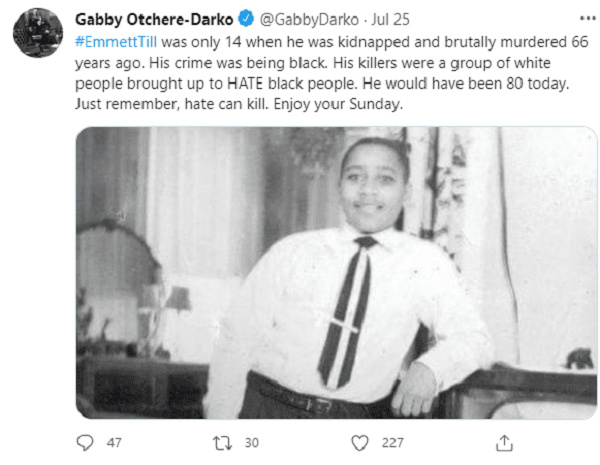 I will no longer talk about any Ghanaian celebrity - Akuapem Poloo

Anti-LGBTQI+ Bill: ‘You can’t even use sex toys’ – Humanist complains

Police clash with demonstrators in Madina over poor roads