The Residents of Aboabo a farming Community near Amanase in Ayensuano District in the Eastern Region have been cut off due to collapsed bridges as a result of heavy downpours in the area.

The collapse of the bridge has caused the river to flood the road making it difficult for residents particularly women and school children to cross.

The situation continues to worsen as the Region has been experiencing rainfall since Monday.

Personnel of the National Disaster Management Organization (NADMO) in the District were in the community on Wednesday to assist residents to access markets and schools in the Amanase community. 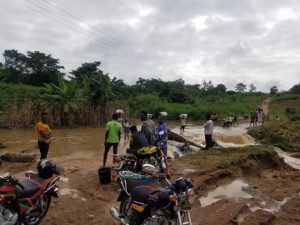 In a related development, the Engineers in Koforidua, the Regional capital have met under the auspices of the New Juaben South Municipal Assembly to evaluate the Ghc16 million Nsukwao drainage facilities.

They have therefore made recommendations to the Contractor of the project and sent a report to the National Hydrology Center to help fix the problem to avert another disaster.

The Assembly believes had it not been the construction of the Nsukwao Drainage facility, the entire Koforidua township would have submerged last Monday considering the magnitude and volume of floods recorded in the Municipality.

The two-hour rainfall which started around 4:00 pm caused flash floods in parts of the new Juaben South Municipality.

Major roads were flooded obstructing the free flow of traffic for many minutes.

Some houses and walls collapsed as the flood water overflew the newly constructed drainage system and violently entered the home to destroy their properties.

Many domestic animals particularly dogs, cats, sheep, goats, and hens were carried away by the floods.

Some old men and women were rescued to safer places by their families as the water levels reach almost window level.

The floods also carried away sums of monies belonging to some of the victims.

Dozens of residents displaced were seen salvaging their damaged items.

Some of the displaced victims slept in vehicles with their families while others slept with friends and families.

President, Nana Addo Dankwa Akufo-Addo on August 4, 2020, cut sod for the construction of the GH¢15,811,145.00 Nsukwao Basin Drainage Project, in Koforidua under the Ghana Secondary Cities Support Programme (GSCSP) of the World Bank to mitigate the perennial flooding situation in the Municipality.

However, residents affected by the Monday floods are questioning the quality of work done on the completed project hence calling on the World Bank and President Akufo Addo to investigate.

How a Ghanaian businessman was nearly duped of almost $200,000